"Everyday, good cells die and new cells are born. They all start as stem cells and, initially, they don't know what they're going to be when they grow up. Some may choose to be red blood cells and carry oxygen to all the organs. Others may choose to be white cells and act as soldiers to fight off infections and kill bacteria. Some will be trash collectors to take the bad stuff out of the body.

But the one thing all these “good” cells have in common is that they all reach a point in their development process where they determine how long they're going to live to perform their various functions. It may seem funny, but each of these good cells determines their own life span and, then, when their job is done, they die. They do that to make room for the new cells that are being born each day.

A leukemia cell is different. From its origin as a stem cell, it gets far enough along the process to determine that its going to be a white blood cell, an immature white blood cell, but then, and this is the troublesome part, the leukemia cell never matures to the point that it triggers a time to die. It simply roams around in the system and separates and continues to separate, never dying, just multiplying exponentially until it clogs up the system, and squeezes out the spaces where new red blood cells and good white cells need to be. If these bad cells aren’t stopped, they take over the system, starve the other organs of oxygen, and cause real problems." Elliott Winton, MD 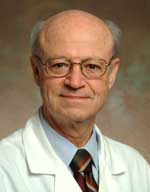