Before hearing he had acute lymphocytic leukemia in 1996, Houston tax accountant Richard Oluwole Johnson thought he was “dancing through life.” But his preferred jazz music ceased as he coped with multiple courses of chemotherapy and struggled to recover from a transplant of matching blood stem cells donated by younger brother Charles. Severe complications kept him hospitalized in isolation at M. D. Anderson or homebound for many weeks, during which he was “limp as a dishrag.” 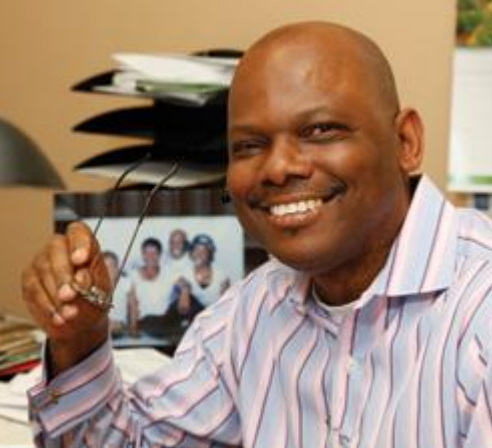 Just when he began to feel better, Johnson received shocking news that his brother Charles had been killed in a car accident. “I was devastated. He had given me a priceless gift and saved my life. For a long time, I wondered why Charles had died and not me. I went through a terrible period emotionally,” Johnson remembers, “but with the support of my family, friends and my church, I rededicated myself to helping others as a tribute to Charles.”

Another turning point occurred when he participated in the Making Cancer History® advertising campaign to raise awareness of M. D. Anderson as the foremost center for cancer care. “I had been inspired when I saw similar TV ads while I was very sick, and I was excited to offer hope to others since I know you can beat cancer,” Johnson says. “Plus I loved being photographed dancing.”

Johnson and his wife Vivian enjoy church and school activities with daughters Kemi, 15, and Dorina, 10, and traveling to see extended family and friends. He is active in a community organization that provides education about cancer and treatment options.

This article is used by permission of The University of Texas M. D. Anderson Cancer Center and first appeared Summer 2009 in Conquest, its quarterly magazine.